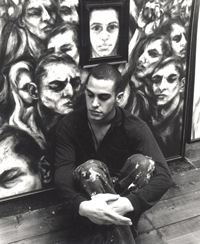 Malec Fustok is a British artist. He lives and works in London.

He studied at St.Paul's School, and graduated from Wimbledon College of Art in 1992 with a B.A in Fine Art. He also studied at the New York Studio School of Drawing Painting and Sculpture.

In 1990, he met Francesco Clemente and visited him at his studio and home in New York. Malec was twenty at the time and found much encouragement from Clemente.

In London, he was taught by Stanislaw Frenkiel (a figurative expressionist painter and former Director of Art at London University Institute of Education). Frenkiel was a family friend, knowing Malec since he was eleven, and was greatly instrumental in his development as a painter.

Malec has also been inspired and helped by Adi Da Samraj, whose artworks have deeply touched him.

He has exhibited in the U.K and America. His work is in private collections.